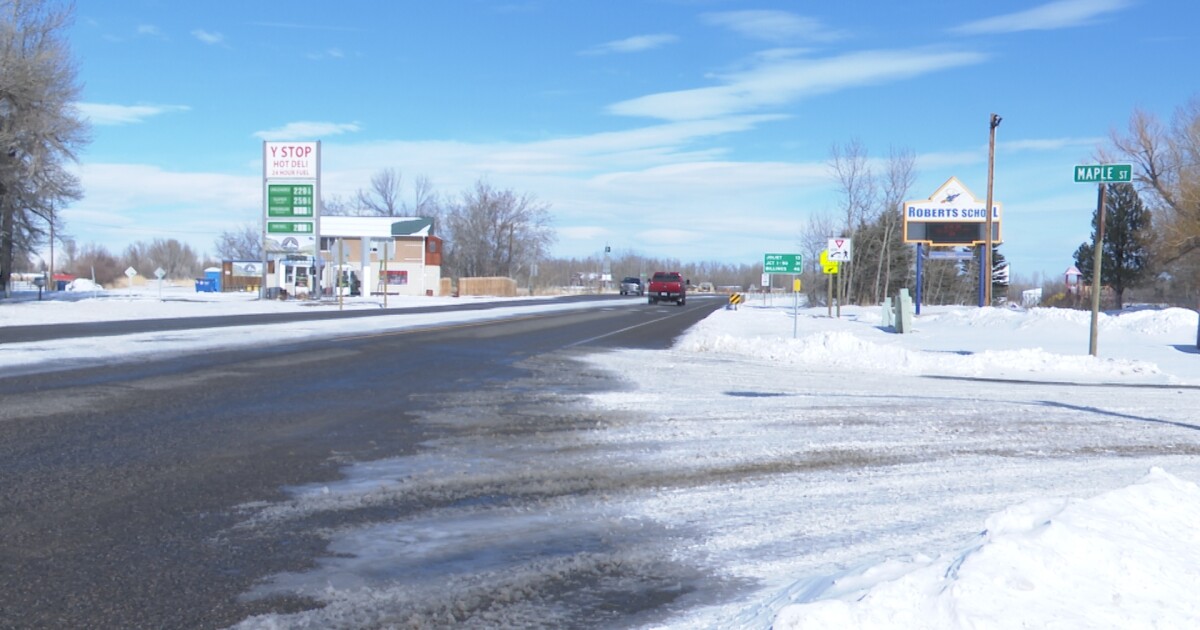 Marijuana dispensary in Roberts facing opposition from school across the street

BILLINGS — The former Y Stop gas station in Roberts is the new home of the Mountain Organics marijuana dispensary. That’s not the point – recreational sales have been legal in Carbon County since January 1. The problem for many townspeople is 100 feet across Highway 212 at Roberts School.

“There are certain things you see, and they stick out like a sore thumb. You think, ‘That’s wrong,'” school superintendent Alex Ator said.

When Ator first heard in June that the dispensary was going in, he immediately assumed it was illegal. After all, the law says the Montana Department of Revenue can’t license a store if it’s within 500 feet of a school. But the second part of the law says he must also be on the same street.

“We’re at 106 Maple,” Ator said, “and they’re on another street across the freeway.”

The measurement is taken from the main doors of the buildings. So whether they are 500 feet away is irrelevant because they don’t share the same address. So legally Mountain Organics has every right to be there.

“The Cannabis Control Division and the Montana Department of Revenue have been here since day one, long before we opened,” said Mountain Organics owner Robert Carson. “All checks have been verified.”

Carson owns and operates the dispensary. He’s been a producer in Billings since January 2020, operating a delivery model until he moved into this building, his first and only storefront.

“It was definitely a struggle,” Carson said of his time with the business. “I’m happy to break even every month, just to keep the lights on.”

Carson can’t afford Billings’ rapidly rising rent prices, so when he heard about the space from a friend, he jumped on it, with the caveat that he’s also repaired and reopened the station. -service. He said he had already spent $30,000 to renovate the building.

“Permits are filed. I’m just waiting for a response,” Carson said. “Accounts are already open with Coca-Cola and other sellers. As soon as I can, doors will open for this gas station.”

A Roberts School employee started a petition protesting against the location of the dispensary. As of the date of publication, it had collected 272 signatures. The 2020 U.S. Census listed Roberts with a population of 299.

Ator says he got really discouraged in January, when Carson put up two flags advertising the company directly in front of the school’s playground.

“When you sit at the bottom of our slide, you see two long flags about 15 feet tall stacked on top of each other that say dispensary,” he said.

“I heard about this concern at the Stewards’ office this morning,” Carson said, “and took down those signs on my way back to town after learning of this concern.”

Carson’s biggest frustration throughout the process was the lack of communication. He said no one came to his store to voice their concerns.

“Not a single person, no. I didn’t know until Thursday of last week,” he said.

“I don’t want to ruffle the feathers. It’s my livelihood. If it falls, I fall. if it breaks down, I can’t fund the gas station. I’m just trying to exist.”

Shortly after speaking to MTN News on Thursday, Carson went to school and met Ator for the first time. The two spoke for about 30 minutes. Their next conversation will be on March 3 at a special meeting of Carbon County commissioners.

“They said they would put a resolution together for a real reason,” Ator said of the meeting, “to pump the brakes.”

Carson received documents indicating that a resolution will be presented at the meeting to enact temporary zoning regulations to limit marijuana businesses. The provisions state that dispensaries must be set back 1,000 feet from a school or residential dwelling, regardless of civic address.

“If they want to shake their pitchforks at me, to get me out of here, I’ll shut up and walk away peacefully, if it comes down to that,” Carson said. “I hope that’s not the case. I hope we can find common ground.”

MANDEL: The killer is sentenced to life without the possibility of parole for 18 years