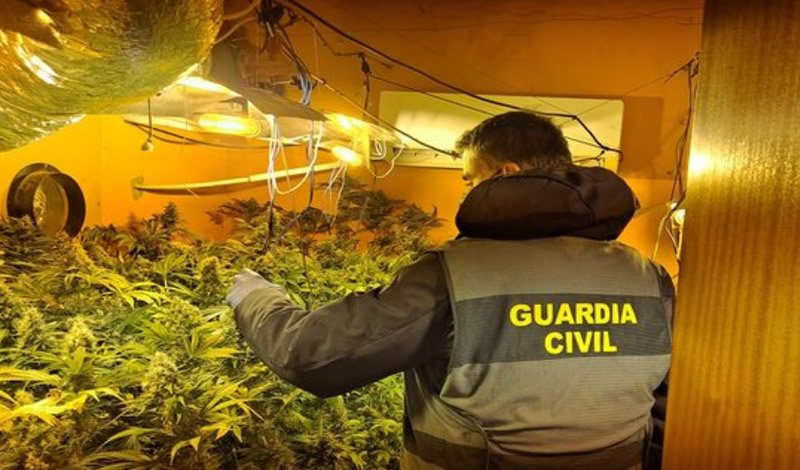 Nearly 1,000 marijuana plants seized in raids in the province of Seville

The Guardia Civil of the province of Seville seizes nearly 1,000 marijuana plants in two houses

Guardia Civil agents dismantled two marijuana plantations in two houses in the Sevillian municipalities of Guillena and Aznalcol. During a joint operation carried out by officers from the barracks of these two cities, the investigators detected two houses in which it was suspected that there might be cannabis crops.

The exorbitant consumption of electricity that had been observed was a clear indicator of this. After requesting entry and search warrants from the courts, the investigators found two marijuana plantations. In the case of the Guillena house, there were 439 plants. Between the two crops, there were nearly 1,000 marijuana plants.

They also seized 26 bags already prepared for sale, an air gun, which was loaded, and a folding knife with a blade over 11 cm. There was also a large amount of electrical equipment in operation, used for the maintenance of the plantation.

According to a statement from the Guardia Civil released today, two people, father and daughter, were arrested as alleged perpetrators of a crime against public health and for the cultivation and sale of marijuana. They were also charged with another crime of electricity fraud.

In Aznalcollar, officers seized 507 cannabis plants and electrical appliances from the plantation. A person who was present in the home turned out to have an outstanding search and arrest warrant for admission to prison, as well as two other requisitions of another nature. He was arrested for the same crimes as those of Guilillena, as reported diariodesevilla.es.

Thanks for reading, and don’t forget to check The Euro Weekly News for all your up-to-date local and international news, and remember, you can also follow us on Facebook and instagram.

Marijuana and redistricting make another game for 2022 | Regional News